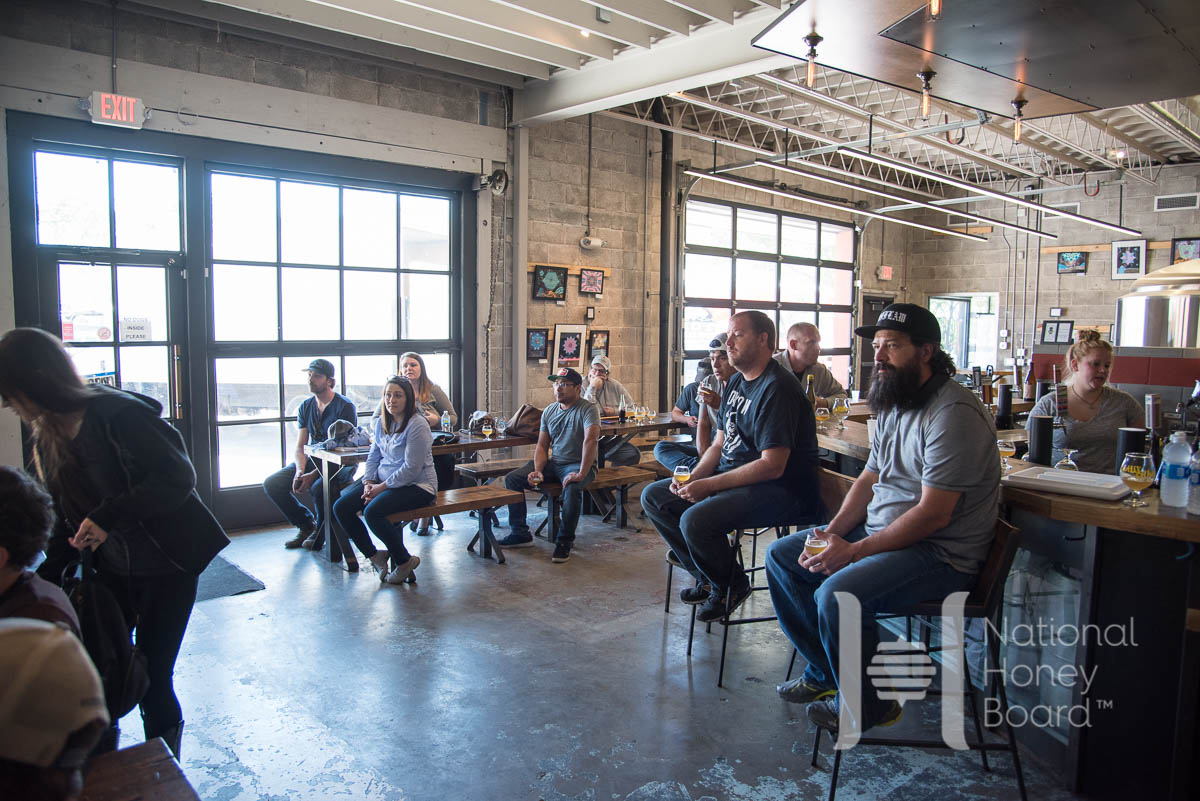 To “Summit” All Up, Brewing with Honey is the New Black (and Yellow)

Posted May 9, 2018 by Jonathan Galbreath

The year is 2013. Our client, the National Honey Board, had started to field quite a few calls about the use of honey in the brewing industry. We knew it was an emerging market for honey, but we also knew it was a small market at the time.

With a limited budget and bigger audience segments to target, we decided to dip our toe in the beer industry by exhibiting at the 2013 Craft Brewers Conference. The show was a success. About 20% of the brewers we spoke with were using honey. More importantly, the 80% that were not using honey had no objections to the ingredient, and just needed ideas and technical research to stimulate the development of a honey beer.

Flash forward five years and we’ve just returned from our fifth Craft Brewers Conference. Just like the first one, it was a massive success. However, one major thing has changed. About 90% of the brewers we spoke to are now using honey. More importantly, these brewers are still looking for ideas to use more honey.

I attribute a significant part of our success breaking honey into the beer industry to the Honey Beer Summit. This was an event we conceived of and launched in 2013, replicating the success we were currently having hosting Honey Baking Summits.

Since 2013, we’ve held a Honey Beer Summit every year in St. Louis. For the last two years, we’ve also held a Honey Beer Summit in Austin. They are wildly popular events and have a success rate of about 90% for launching new honey beers. That’s quite a conversion rate and we don’t see it slowing down any time soon, as the brewing industry continues to grow and brewers continue to look for new ideas and ingredients to brew beer with.

There are many reasons why the Honey Beer Summits are successful. Here are a few:

Honey is an Amazing Ingredient With an Even More Amazing Story 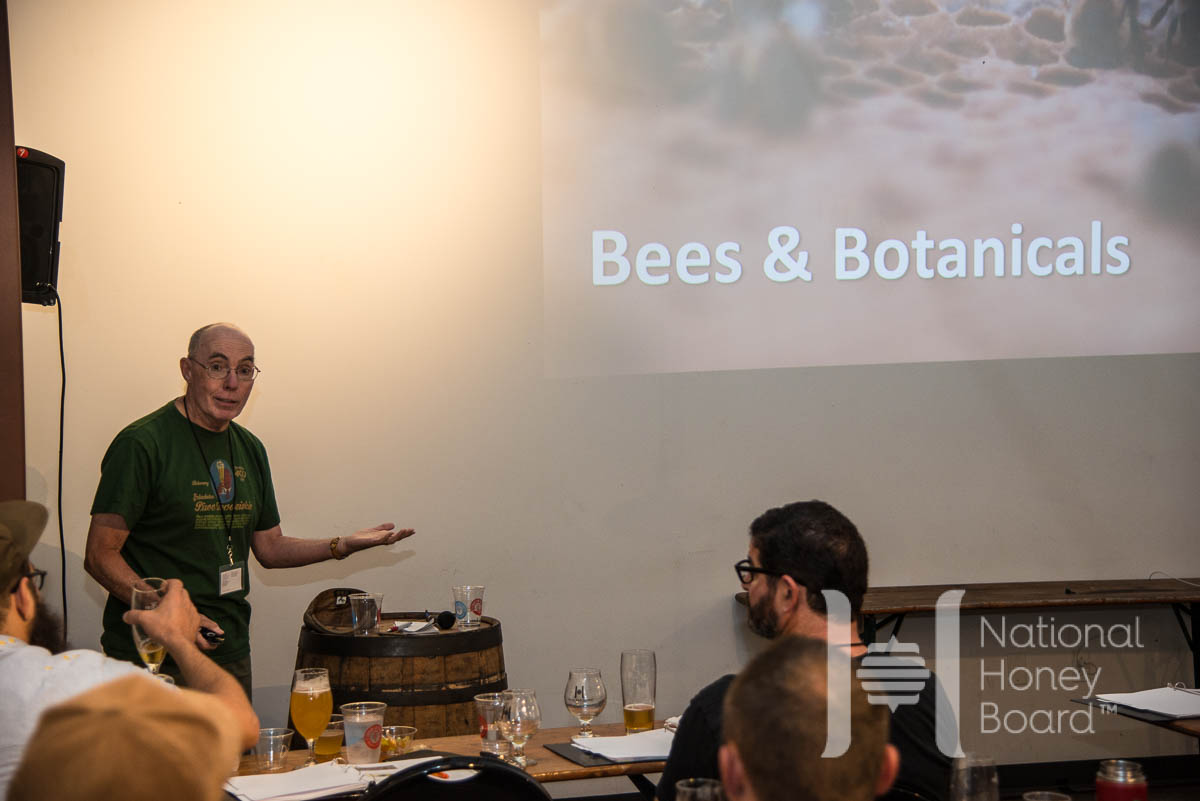 It may seem like a challenge to capture the attention of 30 brewers at 8am, but it’s not, thanks to the story of honey. Honey bees are amazing and telling the story from flower to bee to a brewery to a bottle of beer opens eyes, minds and stimulates countless questions and conversations.

Tasting Honey Varietals From Around the World 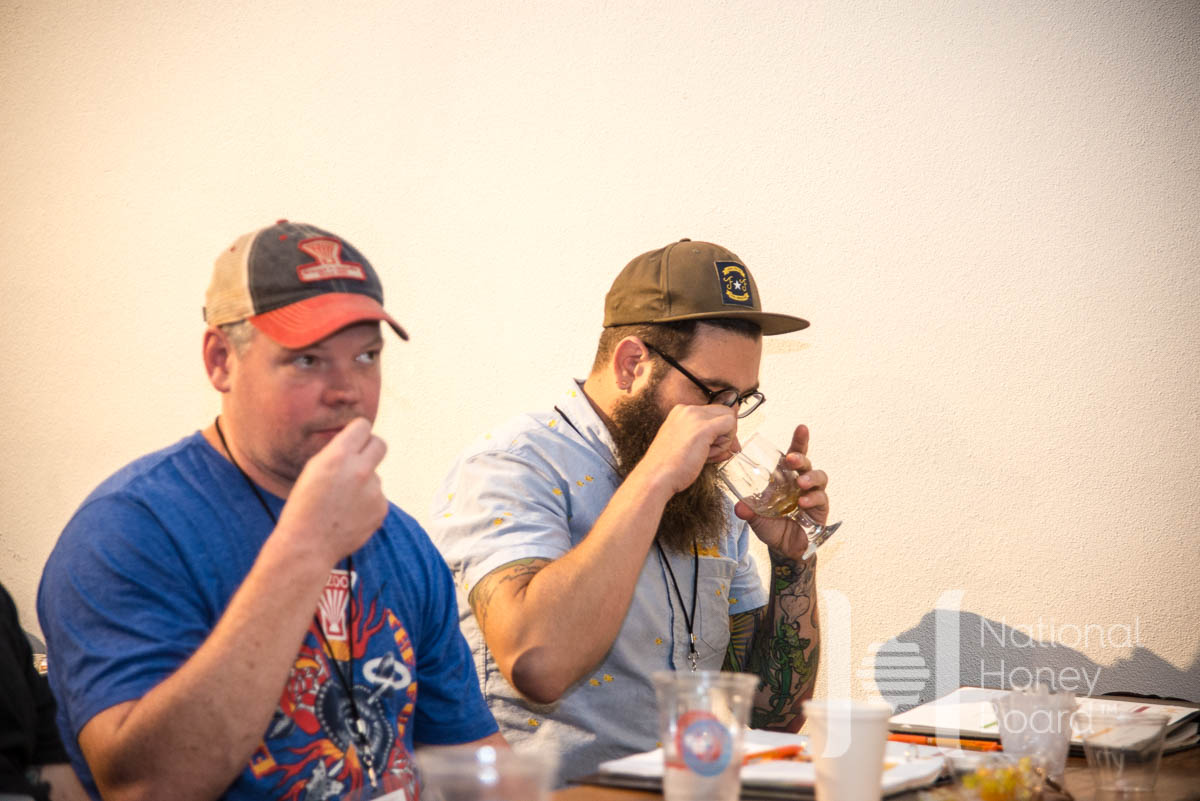 Did you know there are more than 3,000 types of honey worldwide? Each with a unique aroma, color and flavor, solely dependent on where honey bees forage for nectar. In the United States alone, there are more than 300 varieties. I’ve sampled honeys that tasted like marshmallows and others that have tasted like wet barn wood. This diversity of flavor is eye-opening to brewers who immediately start thinking of ways to use varietal honeys for new beers. 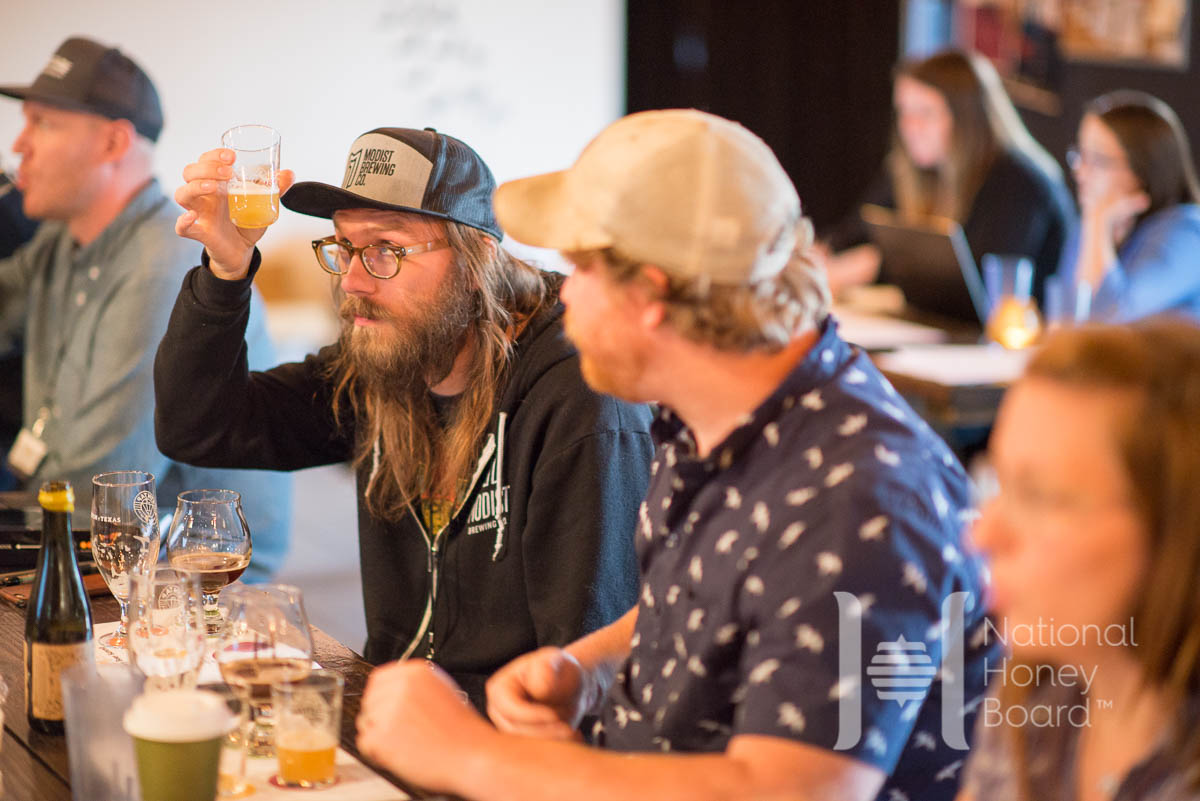 At our Honey Beer Summits, we sample anywhere from 10-20 different varietals of honey, as well as taste honey beers with single varietal honeys to showcase how specific aromas and flavor notes transfer to a finished beer. These tastings are an exceptional interactive and collaborative part of the Summit. 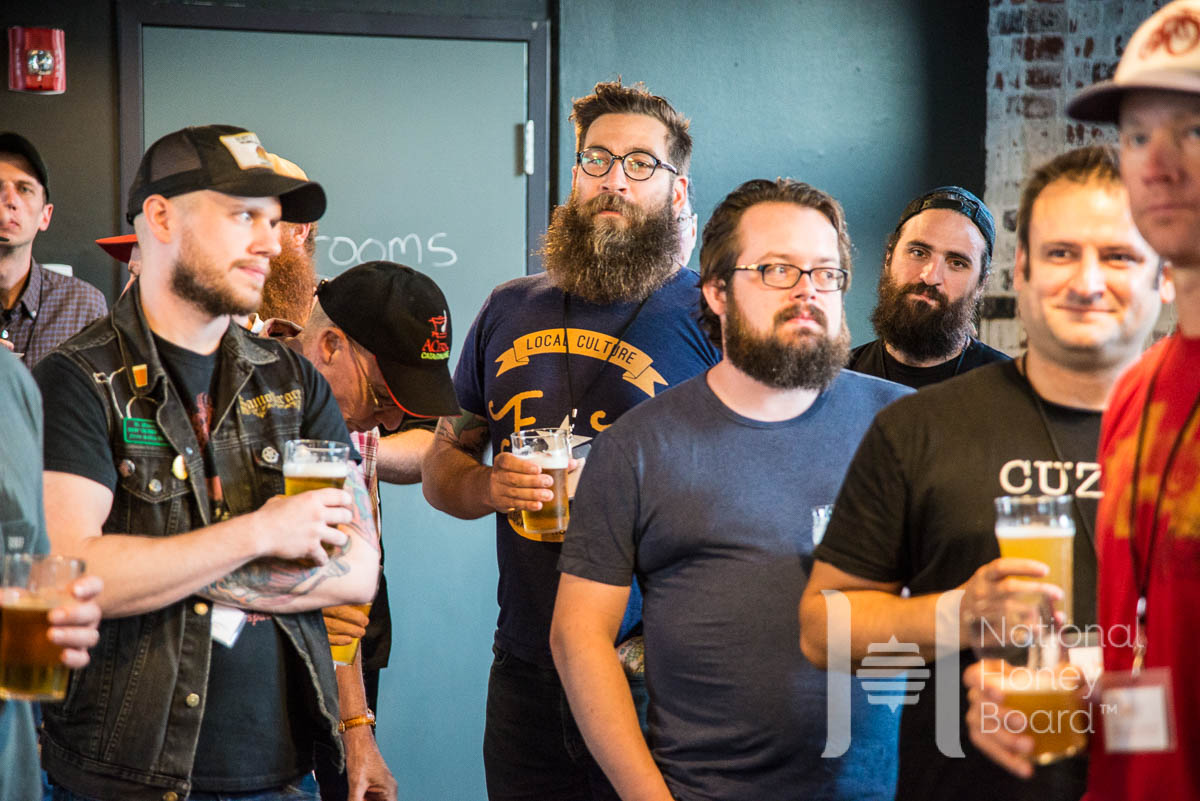 Our first Honey Beer Summit was attended by 15 brewers. Our 2018 event in Austin will be attended by 35 brewers. We could probably host hundreds at an event, but we have purposely kept the Honey Beer Summit an invite-only, small event. We’ve learned that networking among brewers is a great way to spur collaborations of honey beers. We’ve also learned that brewers are insanely smart and creative, and putting them in an environment that is smaller and more personal will stimulate better conversations. 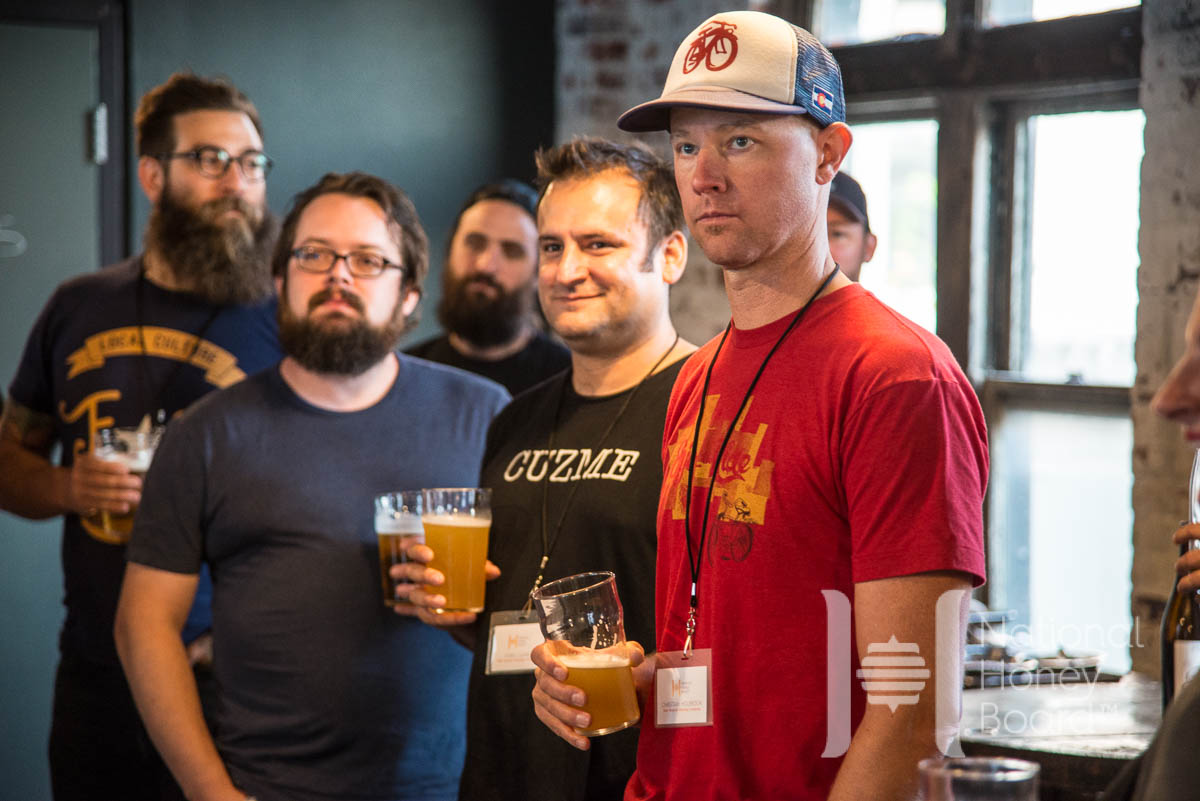 When putting together the initial target list of 25 brewers to attend the Honey Beer Summit, we make sure to include a diverse cross-section of the brewing industry. We want a mix of large, regional craft brewers; small, cult brewers; and everyone in between. We want brewers that specialize in lagers as much as we want to attract brewers known for creating IPAs. Spontaneous fermentation brewers and traditional brewers are all invited. This mix stimulates more in-depth conversations and idea sharing and is essential to ensure we’re not only talking about using honey in beers, but we’re also furthering the technological advancement of brewing with honey. 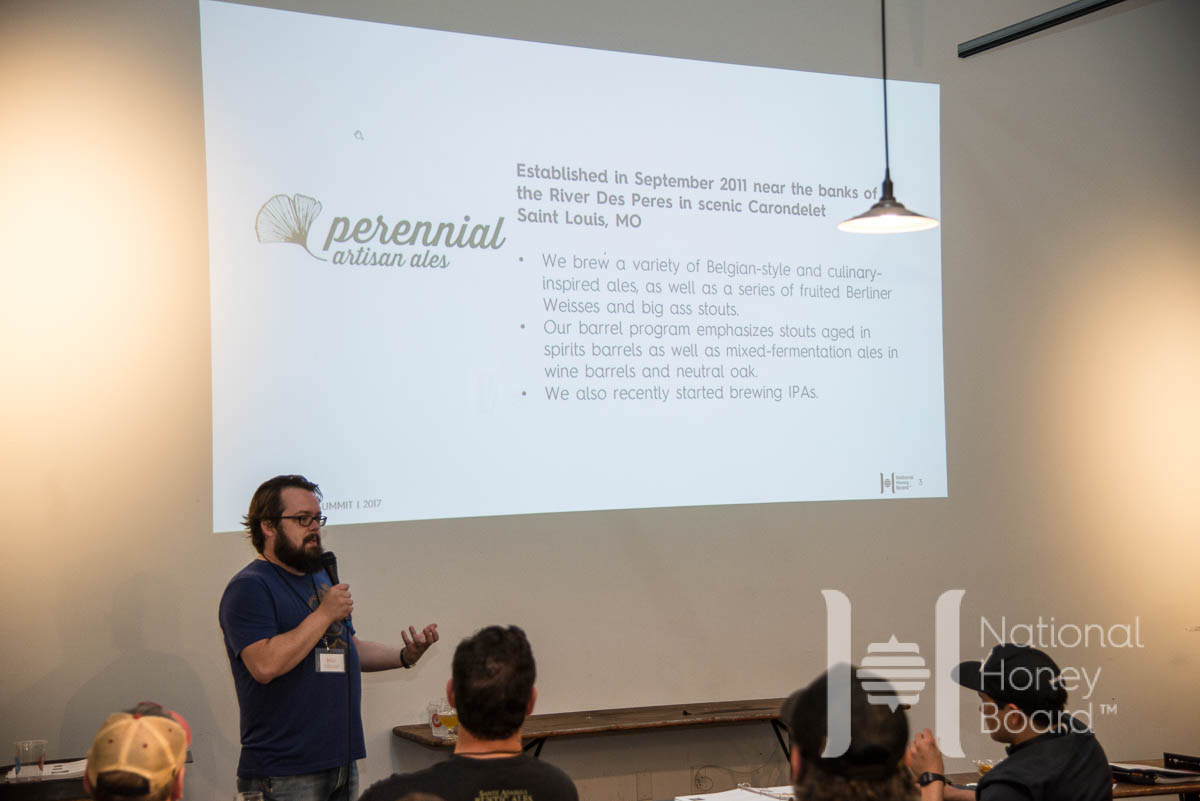 When we conceived the Honey Beer Summit, we knew it was important to not only host the event at a brewery, but also to partner with the brewery to brew a honey beer. We felt it would legitimize our new event immediately and place our brewer attendees in the comfortable setting of a brewery.

The Honey Beer Summit would not be what it is today without Urban Chestnut Brewing Company in St. Louis and its co-owner Florian Kuplent. Florian and his team, especially Jason Thompson, welcomed our event with open arms, providing us with space, credibility and a platform on which to grow. I’m proud to say this relationship has thrived in the last five years. We still host our St. Louis Honey Beer Summit at Urban Chestnut and they even have bee hives now! 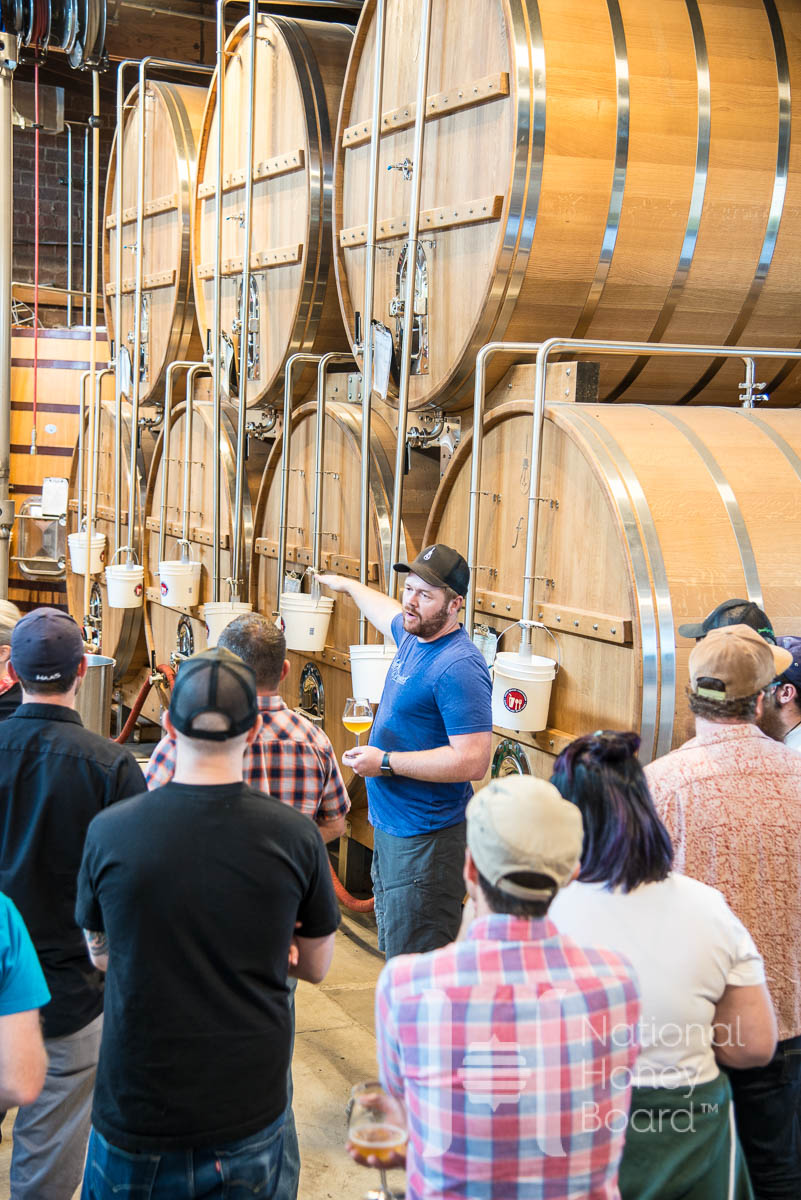 As we’ve grown our St. Louis event, we’ve also formed relationships with other St. Louis brewers that host various sessions and brew amazing honey beers for our attendees to taste. Special thanks go to Perennial Artisan Ales for hosting our main dinner each year, Earthbound Brewery for giving us a tour of their lagering caves and Side Project Brewing for conducting a brewery tour and tasting of La Ruche, one of the best honey beers I’ve ever had. 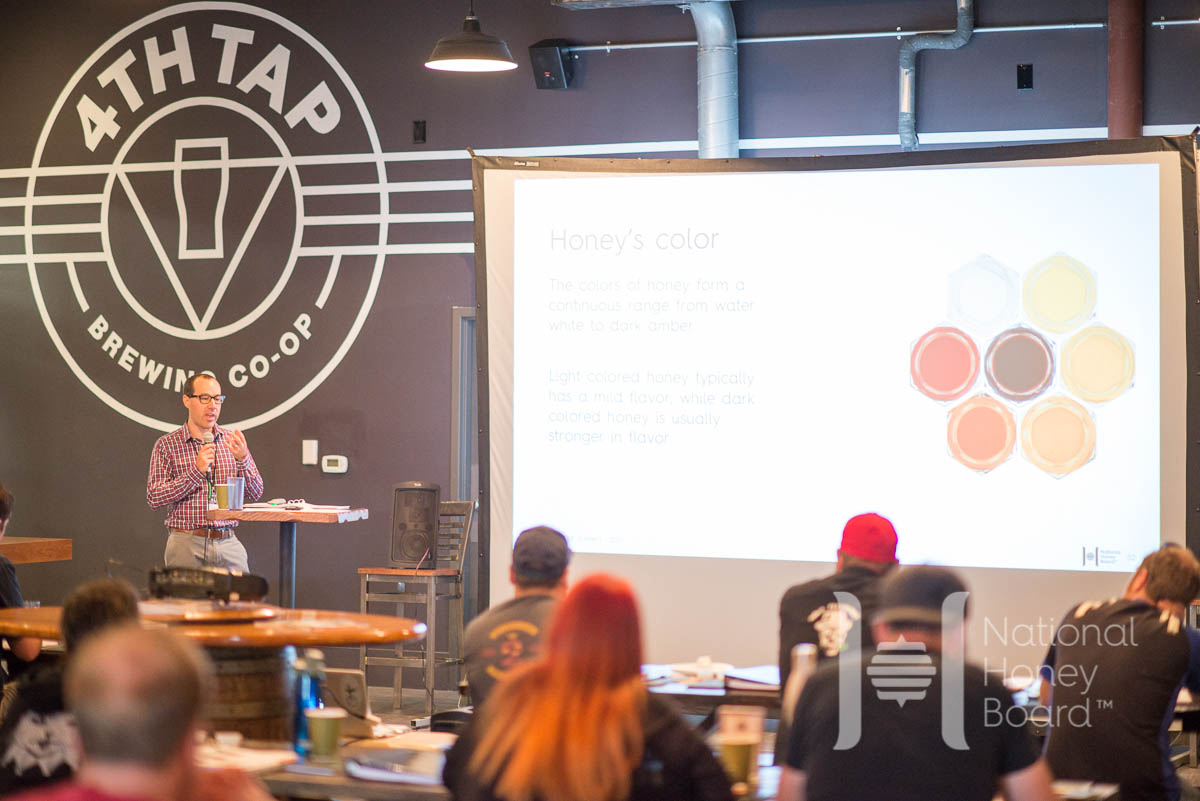 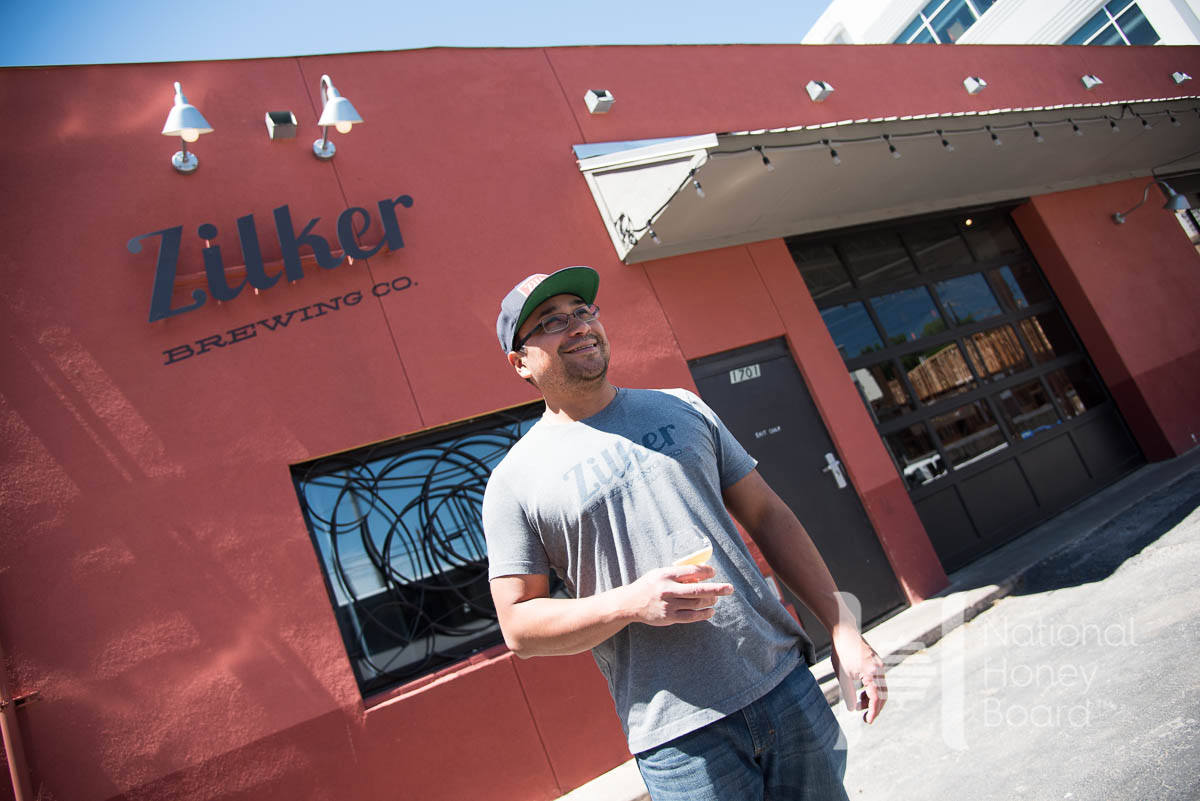 The success of the 2016 Honey Beer Summit in St. Louis led us to expand our efforts and launch a second event. One of our past attendees, Sean Spiller of Jester King Brewery, had expressed interest in rallying the Austin beer community around a Honey Beer Summit in Austin. We jumped at the opportunity and Sean and the wonderful people at Jester King delivered, connecting us with great brewers at Blue Owl and 4th Tap to help us launch our Austin Honey Beer Summit. 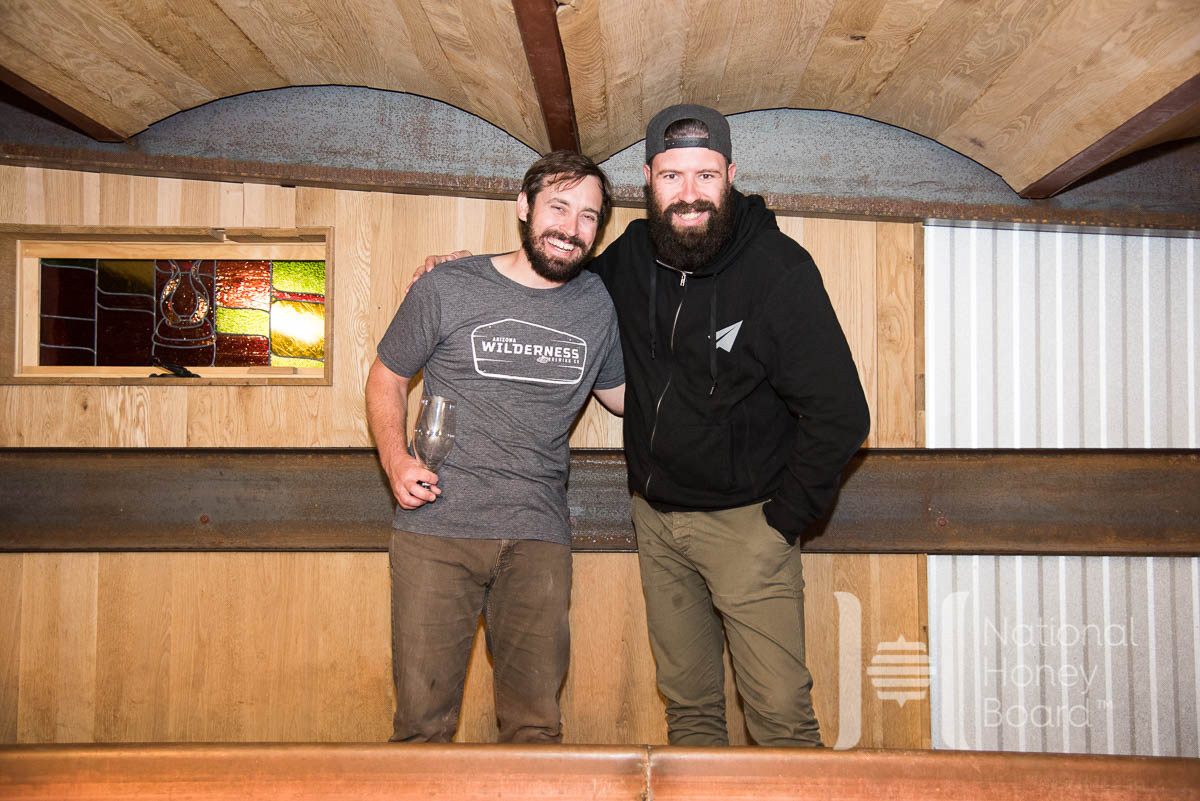 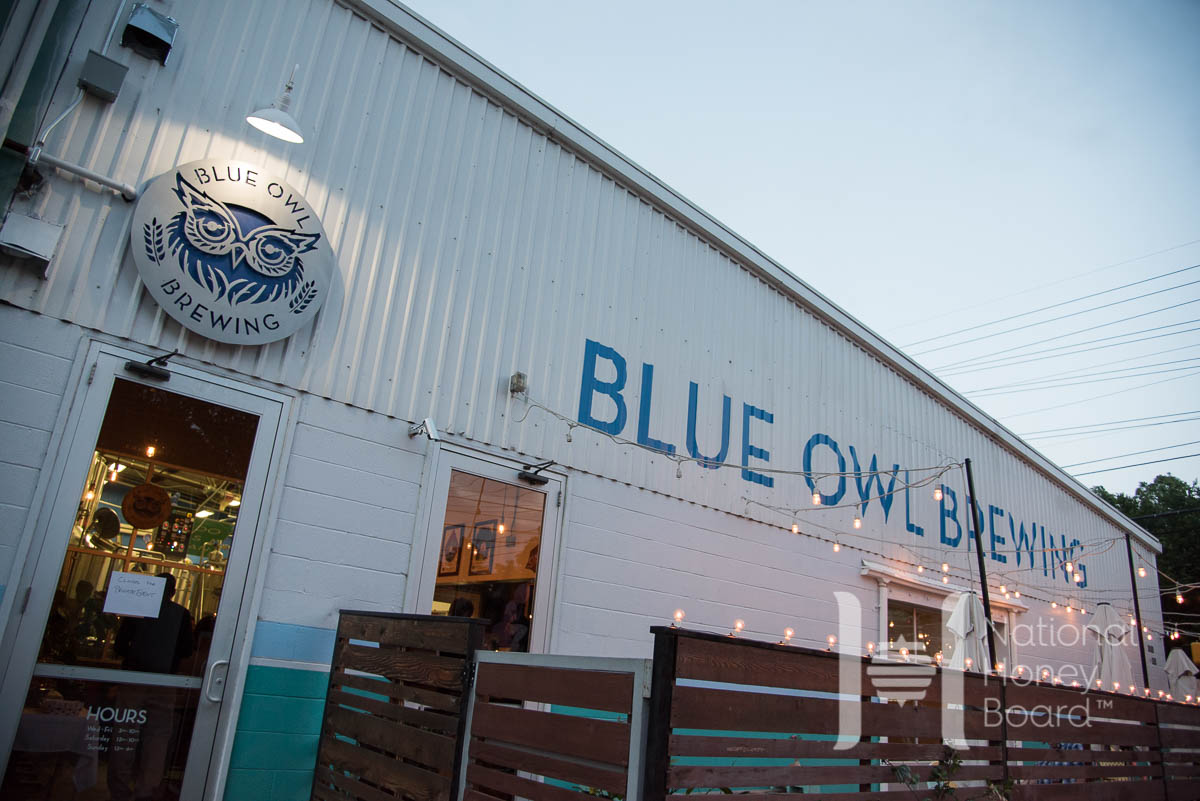 We are about ready to conduct our second Austin event and it’s going to be our biggest one ever with 35 brewers attending. Having the support of Jester King has helped this event grow rapidly, and we look forward to the annual release of their Queen’s Order honey beer. 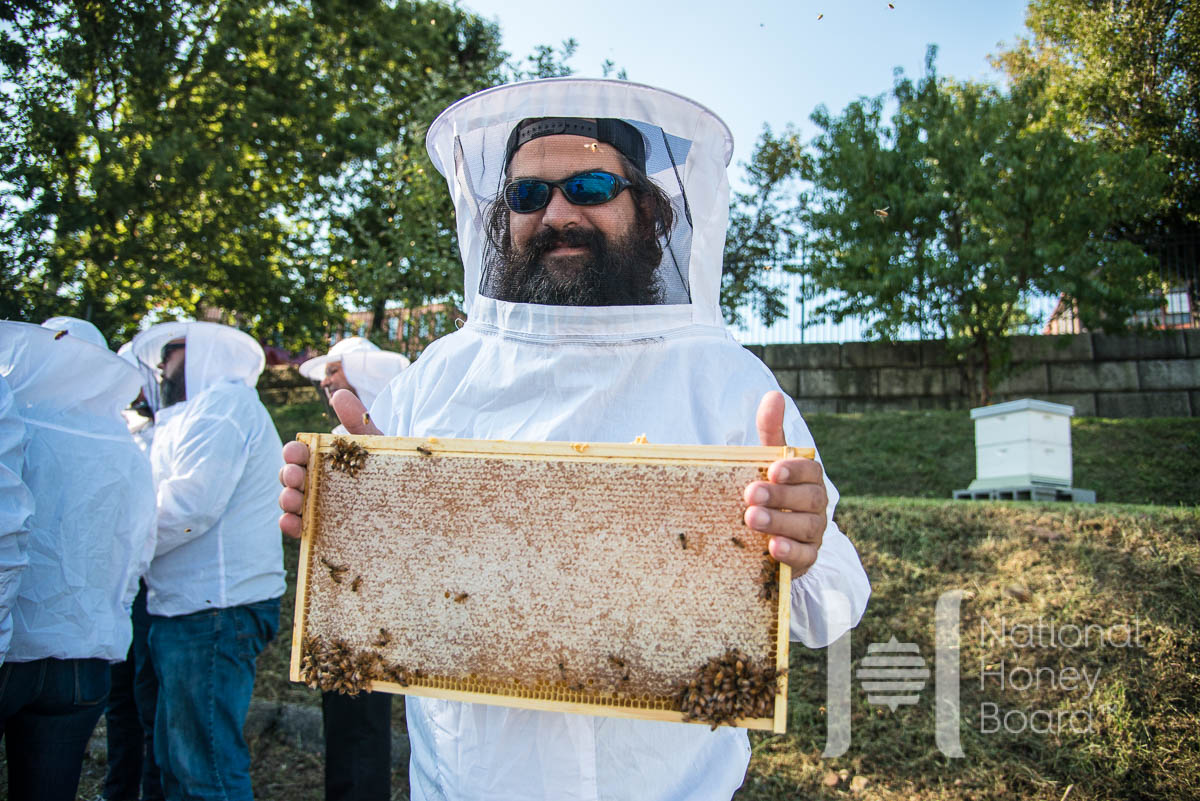 For 90% of our Honey Beer Summits, I’m either speaking, pouring samples or taking care of something. The 10% of the time that I’m free of responsibility is when we take the brewers on an apiary tour. It’s the most rewarding part of the event. To see the excitement of brewers in bee suits as they go through hives and extract honey makes all of the work worth it. I immediately forget the countless hours putting together PowerPoint presentations stuffing binders. 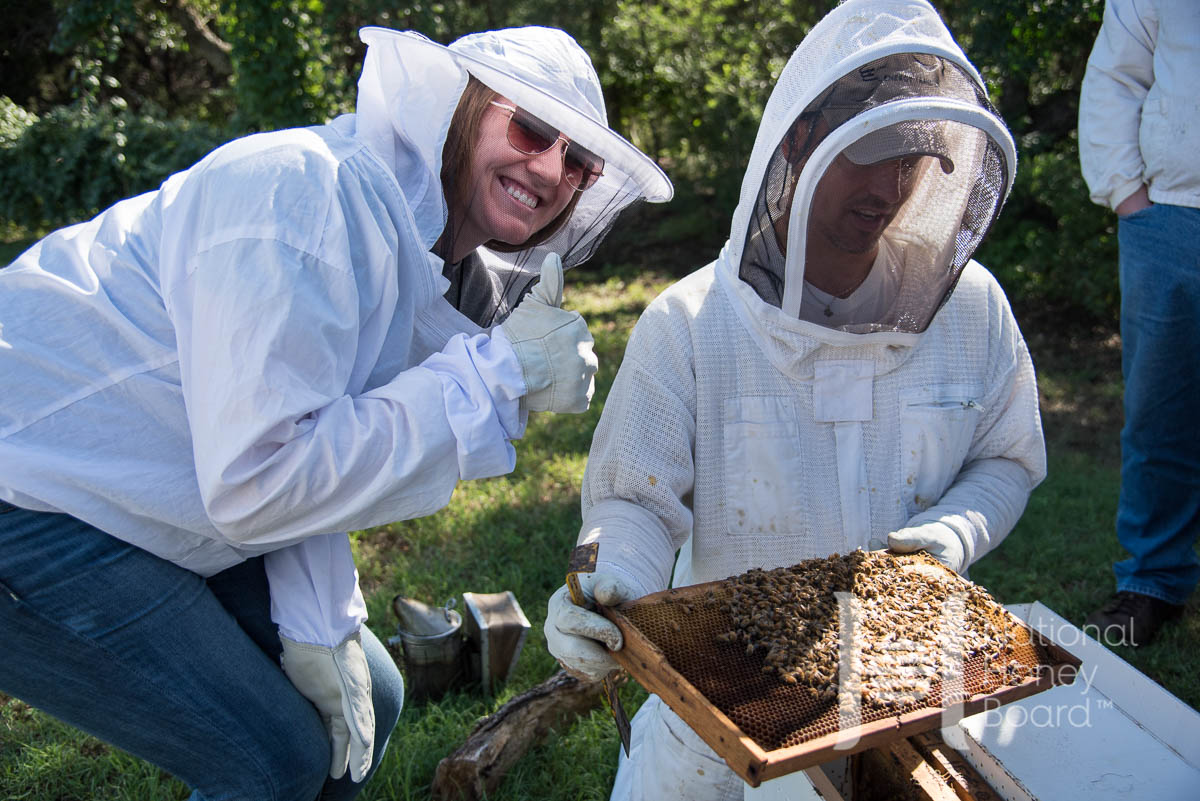 It’s a great conclusion to a great event that we’re proud to conduct twice a year. If you want more information on the Honey Beer Summit, visit honeybeersummit.com.