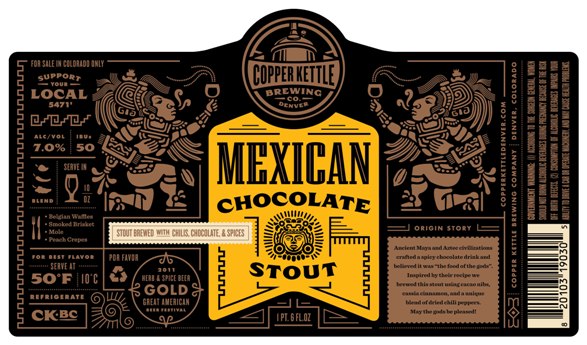 A Few of Our Favorite Things: Stout Season

‘Tis the season for stouts. In this new monthly feature, we’ll be looking at our favorite products every month based on the time of year. Up first, we’re bundling up and writing about our favorite stouts we tasted in January.

What more can we say about this beer that hasn’t already been said? It’s an incredibly complex yet highly drinkable Imperial Stout brewed by one of our favorite St. Louis breweries. Every year, the brew team manages to deftly balance the flavors of ancho chili peppers, cacao nibs, vanilla beans and cinnamon sticks. We don’t know how they do it, but you can find each flavor without any of them becoming overly dominant. It’s one of the most complex stouts we’ve had, and the few beers we wait in line for.

If you’re a fan of pastry stouts, it doesn’t get any sweeter than this anniversary beer laden with all of the common stout adjuncts. However, this beer ratchets up the sweetness level with the addition of caramel sauce. The brewery expertly balances the potential cloyingness factor with complementing notes of coffee and roasted malts.

This GABF gold medal winning dry stout clocks in at 7% ABV, a full body and dark roasted malt flavors. In aroma and taste, cinnamon, chocolate and chili peppers all share the spotlight. We highly recommend drinking this one fresh at the brewery’s Denver tap room.

A Russian Imperial Stout with a 3.5% ABV! We’ll take five. Chicago’s Off Color Brewing is one of our favorite breweries in the country, and this “serf” stout delivers a full body and roasty goodness, all in a sessionable beer.

Ok, these two beers aren’t stouts, but they are winter warmers designed for when the temperatures drop. Up first, Revolution Brewing’s Eugene Porter. This robust porter screams chocolate and toasted cereal grains. It’s everything we love about a porter, and at only 6.8%, we can actually enjoy a few at a time. Dogfish Head’s Palo Santo Marron brings a similar roasty profile, but clocks in at a more aggressive 12% ABV. This brown ale is aged in handmade wooden vessels, imparting a complexity seldom seen in brown ales.