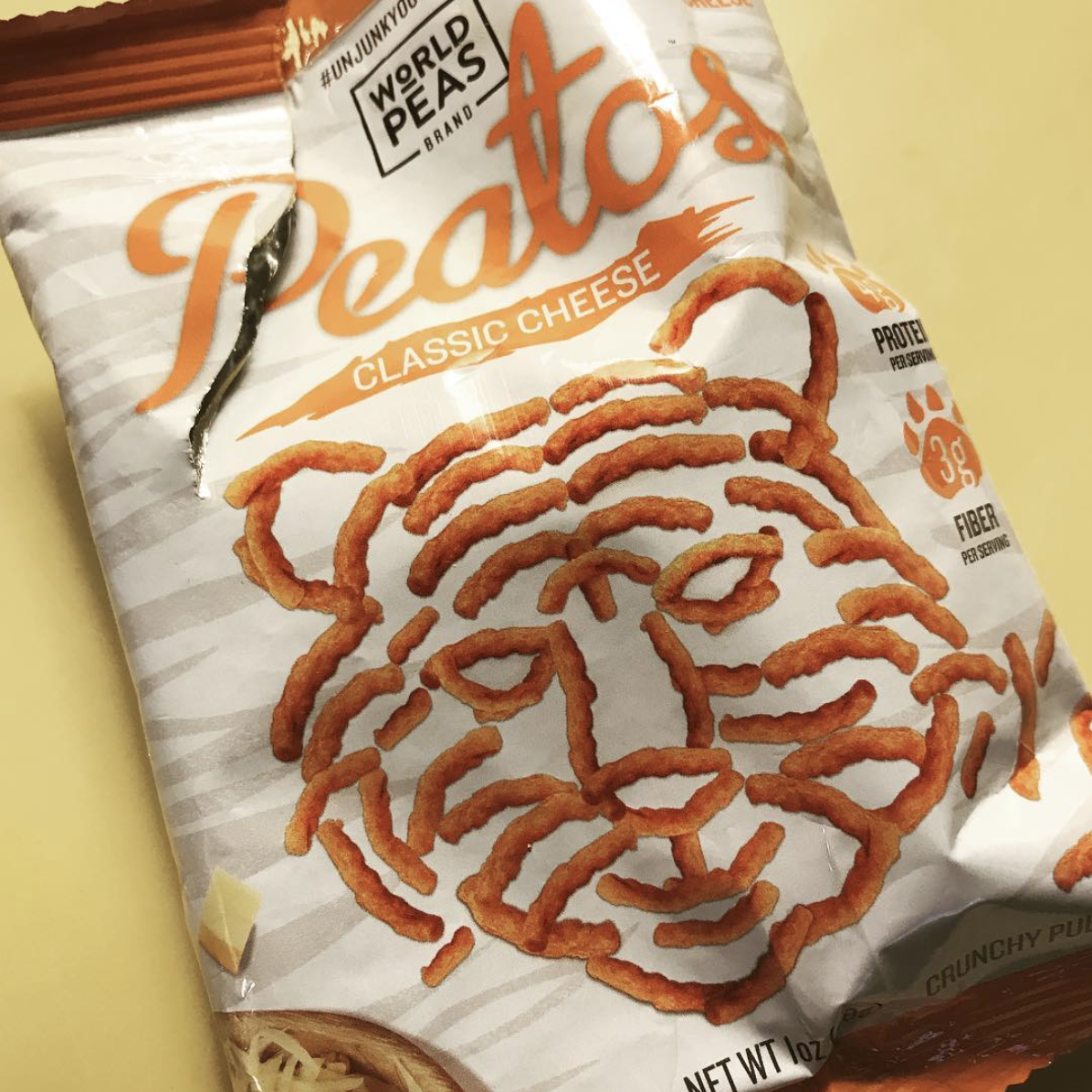 Day One at #ExpoWest: Keith’s Got a Brand New Bag

The Brightly Creative Team is on the scene at Natural Products Expo West, and Keith will be filing reports about what he’s seen, ate and drank. For the first report, Keith analyzes the two snacks in the bag given to each attendee at registration. The show hasn’t even started and we’re already eating and writing! It’s going to be a long three days!

I didn’t expect the first snack I noshed to be my favorite, but it’s going to be hard to top it even though Natural Products Expo West hasn’t officially started. World Peas Brand’s Peatos pulse snack was a knock-out. And not in the manner of, “Oh, this is surprising for a ‘healthy’ snack. Maybe my kids would eat it.” No, Peatos are the real deal. I’d put these in a bowl and serve them at a Superbowl party.

What immediately grabs your attention with Peatos are their intense cheese flavor. It’s not an artificial cheese-like flavor either. It tastes like the real deal. A quick scan of the ingredient list credits this flavor to cheese seasoning. The corresponding ingredients that are in a “cheese seasoning” seemed relatively natural and real, so I’m on board.

The second thing you notice with Peatos is the bite. It’s not wimpy. It’s super crunchy. It’s sharp and crisp with no give. It’s the perfect snack. And, by far the best pulse snack I’ve had.

Pulses have become a favored ingredient for natural snack makers and healthy eaters. They sound fancy, but they’re not. Pulses are just the edible seeds of plants in the legume family, such as beans, lentils and peas. They are a low-fat source of protein and have quite a bit of fiber. Even more importantly, they’re relatively cheap.

My only beef with Peatos came when I went to their website to find out more information. Other than the home page, every other page on the website gave me a 404 Error. Not good, especially since the company paid a significant price to drop a sample pack of Peatos in every registration bag given to attendees.

Dear executives of World Peas Brand. I know an agency (Brightly Creative) that does great websites. I’m sure they would love to make sure this kind of thing doesn’t happen again. Please feel free to email me at thinkfast@brightlycreative.com. 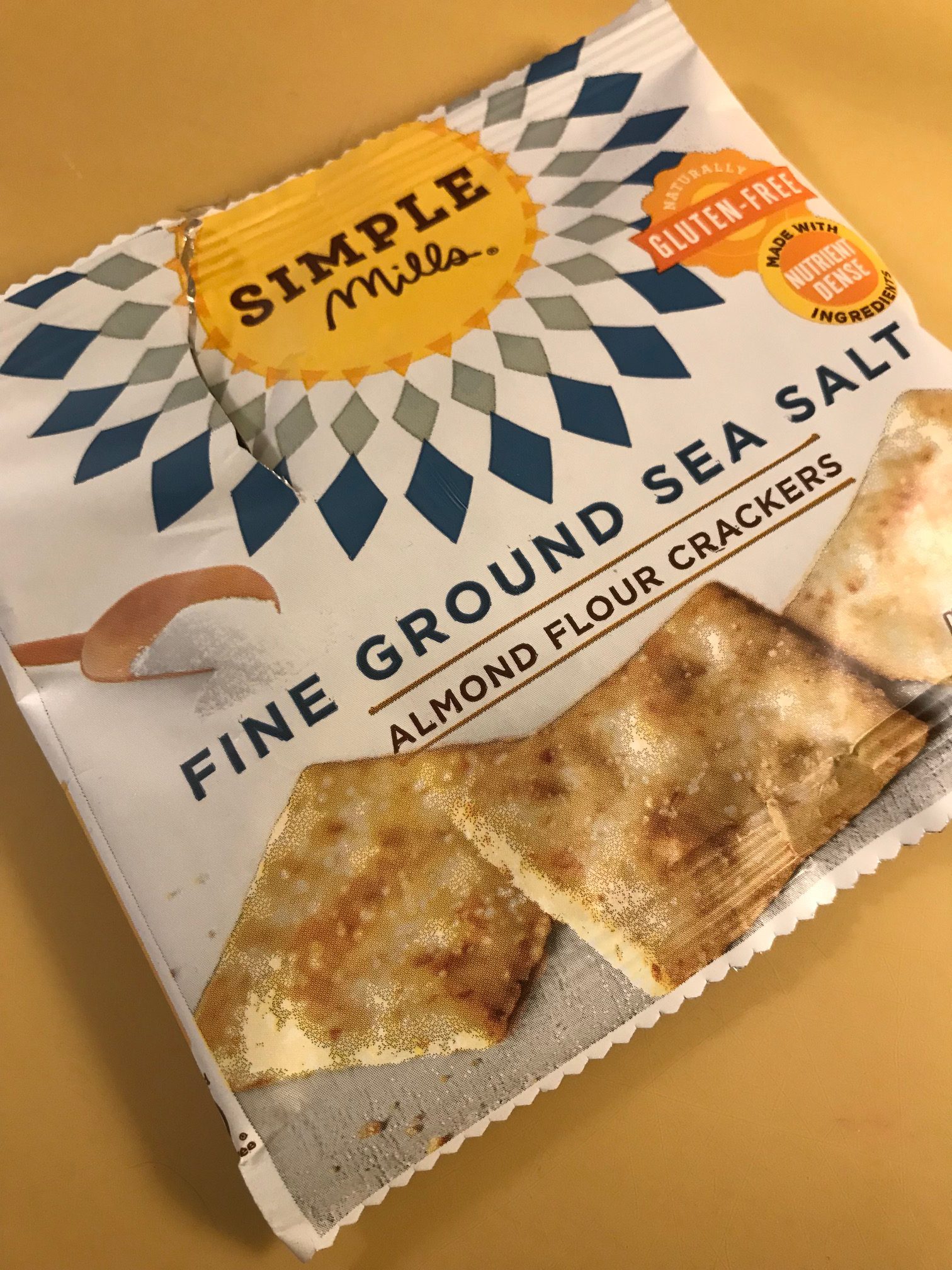 Up next in my registration bag of snacks was an almond flour cracker from Simple Mills. Unlike Peatos, this was a product I immediately wondered if I could get my 5-year old to eat. It’s not that it was bad, it’s just that it wasn’t anything special. The nut and seed flour blend in the cracker overpowered all other flavors. It kind of tasted like a loaf of bread that used too much flour during shaping. The first bite of the cracker tasted a bit like raw flour.

Maybe that’s just the sacrifice you have to make when using almond flour. If that’s the case though, then I think the overall spice mix needs to be ramped up.  For starters, there wasn’t enough salt even though the most prominent descriptor on the package was “Fine Ground Sea Salt.” As a marketer, that seems a bit excessive. “Sea Salt” would have sufficed, and more of it to boot.

One thing I did love about the product was its ingredient list. Eight ingredients, all natural, all real. I’d buy this cracker for myself, but not sure my kids are going to be sold.